It would seem that he was the son of a serving soldier, but no trace can be found in any New South Wales records of his birth or baptism, or in any held in the Army Chaplain's Registers at St. Catherine's House. But see the 1881 Census Return below.

The regiment was at Arcot in the Madras Province at this time.

Returned to England from Madras in February of 1840 and landed at Gravesend in the following June.

Embarked aboard the H.T. "Negociator" and sailed from Portsmouth for the Crimea on the 10th of May 1854.

He was wounded in action at Balaclava, "being sent on board ship without seeing the Surgeon," on the 26th of October 1854.

Rejoined the regiment on its return from the Crimea at Ballincollig, Ireland, on the 3rd of June 1856."

From Private to Corporal: 1st of September 1855.

Sent to the Royal Hospital Kilmainham, on the 6th of December 1855.

Discharged from the Royal Hospital Kilmainham on the 15th December 1855:

"Unfit for further service. This man suffers from chronic rheumatism - the result of natural pre-disposition."

In Turkey and the Crimea, 1 year. East Indies, 9 years.

Entitled to the Crimean medal with clasps for Alma, Balaclava, Sebastopol and the Turkish medal.

Attended the first Balaclava Banquet in 1875.

To live in London after discharge (Buckingham Palace, SW1) [sic] but he was living in the Salisbury Pension District from 1859.

A daughter-in-law and two stepdaughters, Georgiana and Mary, are also shown.

Also shown are James Gray, 27, step-son, and a boarder.

He was living in the home of James Wilson, a Beer Seller, aged 36, born in Durham, Sunderland, with his wife, Georgina, 35, born in Leavening, Yorkshire, and two children, aged ten and four.

Extract from the Salford Weekly News for the 5th of November 1881:

A few evenings since, at the Brunswick Inn, Union Street, Higher Broughton, a number of admiring friends met to celebrate the twenty-seventh anniversary of the famed charge of the "Light Brigade", and to do honour to one of its renowned heroes, Corporal James Cameron of the 13th Light Dragoons.

Speeches, toasts and songs suitable to the occasion kept the evening all alive, and to see the old veteran, who is now in his sixty-eighth year, behind some half a dozen clasps and medals which adorned his breast whilst he modestly expostulated on the dashing events of that ever-to-be-remembered day, was a picture worth looking at and one which could have hardly been improved by the magic art of even a Miss Thompson herself.

The brave old veteran seemed thoroughly to enjoy his position, and appeared once more to realise the glories of that day that made British arms a by-word for bravery throughout the world. Poor fellow, their rank and file is getting very thin with age; but, as Tennyson says, "When will their glory fade."

The "magic art of Miss Thompson" is a reference to Elizabeth Thompson, later Lady Butler, who painted "Balaclava" and many other military subjects (see her biography in this site).

James Cameron died at Manchester on the 11th of December 1882, aged 70 years, and was buried in the Weaste Cemetery at Salford in Grave No. 1396/A3. 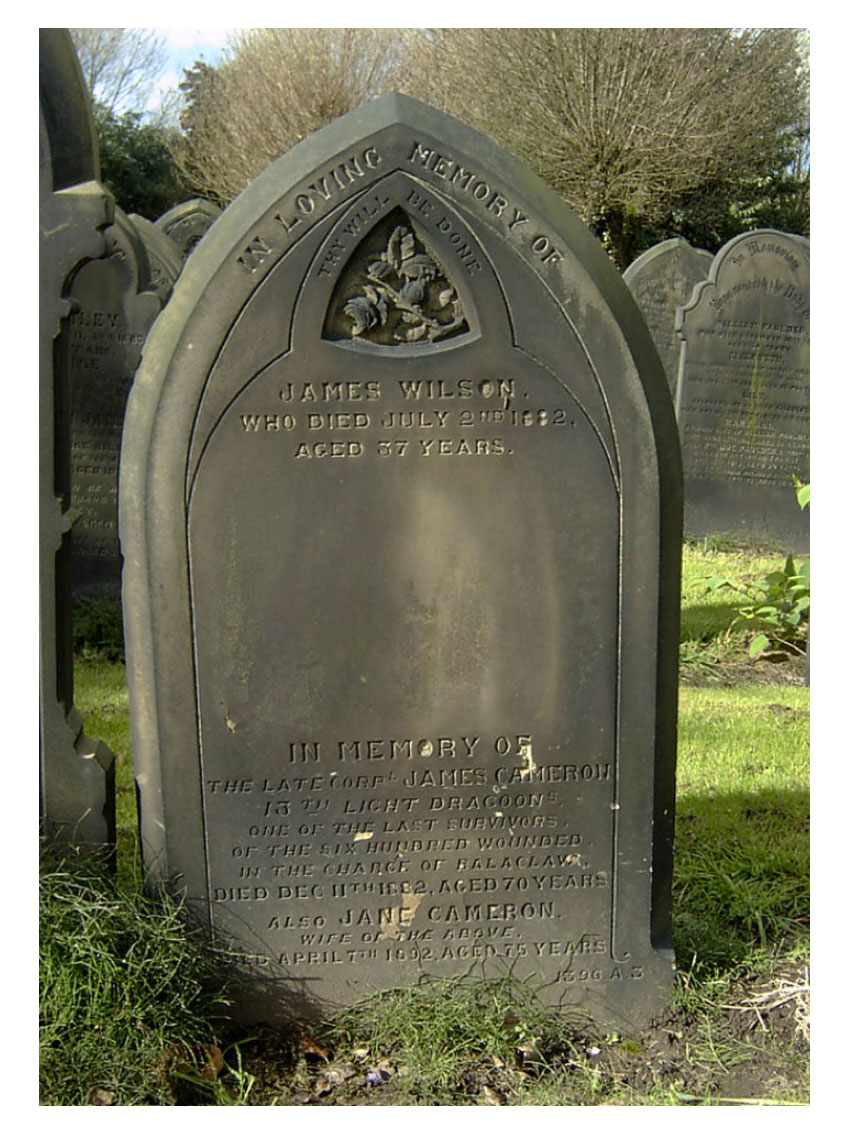 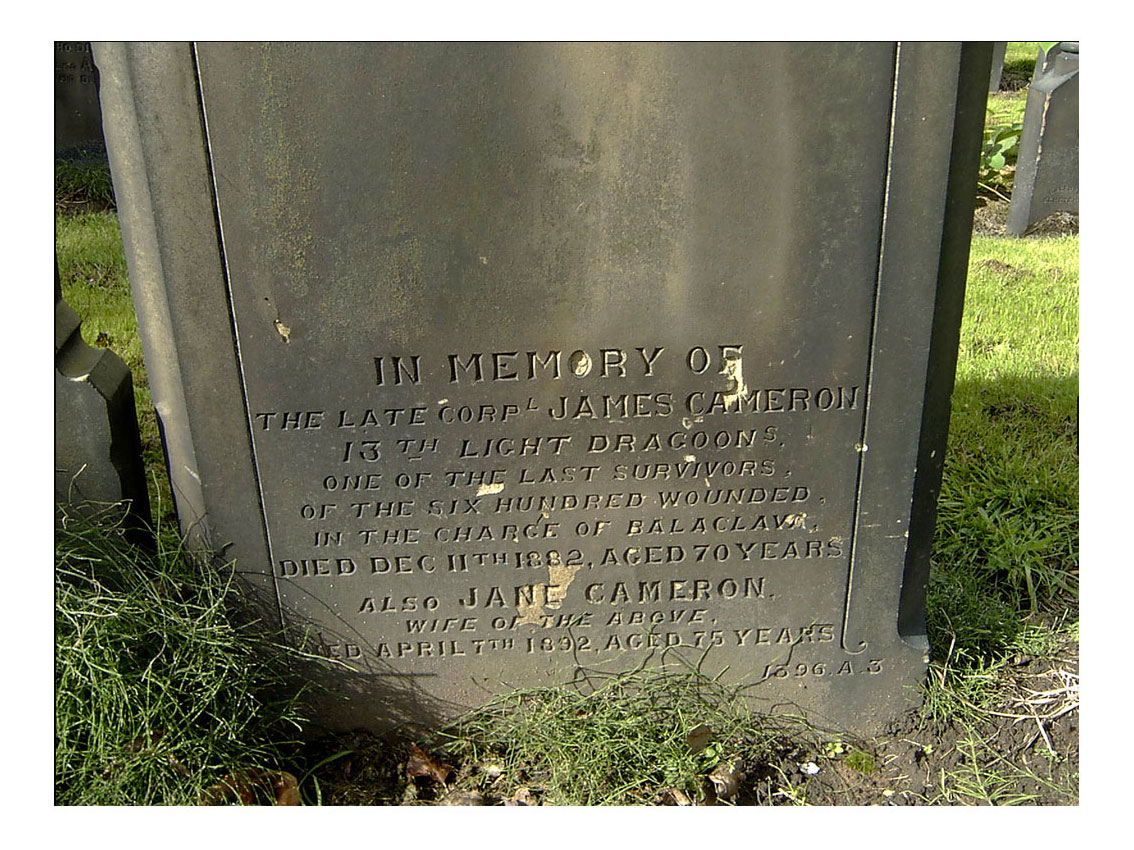 The erected tombstone bears the inscription:

"In memory of the late Corpl. James Cameron 13th Light Dragoons. One of the last survivors of the Six Hundred wounded in the Charge at Balaclava. Died Dec 11th 1882, aged 70 years.
Also Jane Cameron, wife of the above, died April 7th 1892, aged 75 years."

(There is a photograph of this gravestone in the 13th Hussar file.) 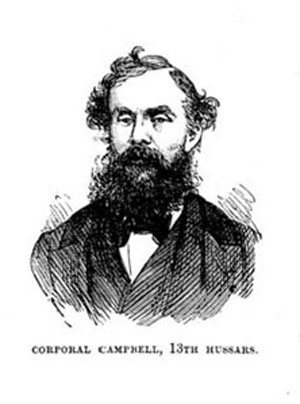 Is this ILN portrait Corporal Campbell or James Cameron?

The portrait of "Corporal Campbell" that appeared in the Illustrated London News, 30th of October 1875, may possibly be James Cameron. Although it is credited as 1346 Aitcheson Campbell of the 13th (who indeed ranked as a Corporal), Campbell was not shown on the list of those attending the Alexandra Palace Fete and Banquet on the 25th of October 1875. All the other portraits that appeared in the "Illustrated London News" of the time are of men who were present. (See copy of this in the 13th Hussar file.)