Enlisted at Hounslow on the 11th of November 1843.

Note: It has not been possible to consult an image of the original Scottish Census document. The above information relies on the transcription available 28.3.2012, which is not always accurate.

Wounded in action at Balaclava.

Sent to Scutari on the 26th of October 1854, having been "sent on board ship without being seen by the surgeon".

Sent on "Sick furlo until discharged" to Bristol on the 30th of June 1855.

Finally discharged from Chatham Invalid Depot on the 2nd of October 1855, as "Unfit for further service from vertigo and loss of incisor teeth of both jaws from shell wound received at Balaclava".

Entitled to the Crimean medal with clasps for Alma, Balaclava, Sebastopol and the Turkish medal.

Attended the first Balaclava Banquet in 1875.

Member of the Balaclava Commemoration Society in 1877 and 1879.

Signed the Loyal Address to the Queen in 1887.

To live in Bristol on discharge.

He was still there in 1875, when he returned from the Balaclava Banquet held at Alexandra Palace (25th October 1875) to face trial for debt. Martin, clearly a colourful character, defended himself vigorously, seemingly to universal hilarity. Notice the frequent references to his military experiences, culminating in him saying he would "rather trust in the Russian guns" than to the "tender mercies" of his opponent in court.

"Edwin" [Edward] Martin's Court appearance in Bristol, as reported in the Derby Mercury, 3rd of November 1875.

The case must have excited general interest because it was also reported in the same way in "Sheldrake's Aldershot and Sandhurst Gazette" for 30th of October 1875 (on the same page as a detailed report of theBalaclava Banquet), and possibly in other newspapers around the country too.

Admitted as an In-pensioner at Chelsea Royal Hospital on the 1st of September 1884.

At the time of his entry into Chelsea Royal Hospital as an In-Pensioner he was aged 61, "had no wife, and his children were provided for". His character was "good" and he had previously been living in the Bristol Pension District.

Died at the Chelsea Royal Hospital on the 31st of March 1887. 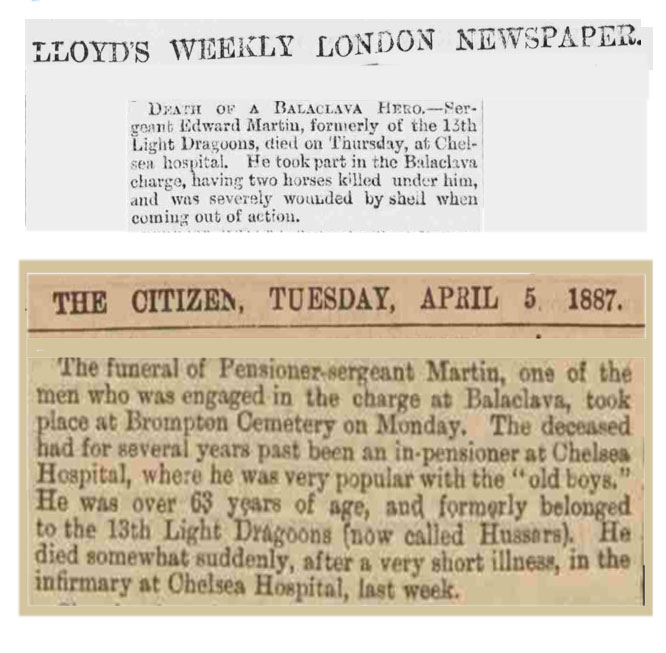 Buried in the Chelsea Pensioner's Plot in Brompton Cemetery, London. No headstone was erected.

Census information for 1851 and registration of death kindly provided by Chris Poole.