Born at Southborough, between Tonbridge and Tunbridge Wells, Kent c.1830.

Embarked for the Crimea aboard the "Culloden" on the 10th of May 1854.

His horse was killed under him in the Charge.

So many horses were killed or injured that Mitchell was for a time without a mount. But he describes how he acquired a Russian horse, which he named "Menschikoff" (after the Commander-in-Chief of the Russian Forces), when a stampede brought a great number into the British camp:

"...we found ourselves possessed of something like forty extra horses, with appointments complete, such as they were. I was now and was allowed to keep him. I now felt more at home, for a dragoon without his horse is something like a fish out of water" [ Recollections, 1st edition, p.92, CWRS Special Publication 31, p.60ff].

[PB, Feb, 2014: it's such an interesting account that it would be worth adding more.]

In his Recollections of One of the Light Brigade, Albert Mitchell wrote one of the best accounts of the experiences of a ranker in the Crimean War. It was published in Tunbridge Wells in 1884. Extracts have been used extensively in these records to portray individuals and events (as in just about every book ever written about the Crimea). There is a copy on the "Memoirs" file.

Discharged, "time expired", from Aldershot on the 1st of September 1863.

Conduct: "very good". Would have been in possession of two Good Conduct badges if not promoted.

Entitled to the Crimean medal with clasps for Alma, Balaclava, Inkerman, and Sebastopol, and the Turkish medal.

Signed the Loyal Address to the Queen in 1887.

Attended the Annual Dinner in 1897.

From Mr. E.P. French of Tunbridge Wells came the information that Albert Mitchell was his great uncle and that he was in possession of a silver watch, passed on to him through his father.

The watch is inscribed:

"Presented by the Non-Commissioned Officers to Sergeant A. Mitchell on his leaving the Regiment, as a token of their esteem. September the 5th 1862."

Mr French said he hoped to present this to the Regimental Museum, but there is no knowledge if this has been done.

Caroline Akehurst, aged 50, a widow, was acting as his Housekeeper.

The following information came from the Archives of the Kent Constabulary:

In 1885 he was a Retired Instructing Constable of the Kent County Constabulary living in North Road, Southborough, Kent.

"The death occurred on the 21st [sic] inst. at Southborough, Kent, of Mr. Albert Mitchell, who, as a Sergeant of the 13th Light Dragoons, took part in the charge at Balaclava, where his horse was shot under him.

After leaving the Army Mitchell spent many years in the Kent County Constabulary, retiring on a pension in 1884. Later, he had charge of an Institute at Benenden built by Lord Cranbrook, who always took a great interest in the old soldier and assisted him in publishing a book compiled from his diary and recollections. One of the deceased's two sons is a Farrier-Sergeant in the regiment."

He was buried in the churchyard of St. Peter's at Southborough, Kent, the inscription on his tombstone reading:

"In memory of Albert Mitchell, late Sergeant in the 13th Hussars. Died 16th of January 1897, aged 67 years. Deceased served throughout the Crimean campaign, taking part in the engagements of the Alma, Balaclava, Inkerman and Siege of Sebastopol. Also the affairs of the Bulganak and MacKenzie's Farm.

This stone was erected by the members of the above Corps as a tribute of respect to a brave and deserving comrade. Also of Albert Edward, son of the above, who died 7th of June 1899, aged 29 years."

See photographs in the 13th Hussar file of the tombstone and of the house at No. 20 Norton Road in Southborough where he lived with his wife after leaving the Army. Also No. 2 Taylor Street, Southborough, the home of his sister, where he died. This village is now a northern suburb of Tunbridge Wells.

From an article which appeared in the Kent and Sussex Courier, 26th of October 1979:

Albert Mitchell was discharged from the Army in 1862 and a year later he joined the Kent County Constabulary, serving for many years at until he contracted "Barite's Disease" [sic? But in any case presumably one of the painful kidney disorders then usually described as Bright's Disease], and had to retire in 1884 with a pension of 13/- per week. Lord made him Steward of the new St. George's Club, but by 1892 the old soldier had to give this up and returned to Southborough, moving in his final years to the home of his sister at No 2 Taylor Street, his wife having pre-deceased him in 1875.

In January of 1897, a retired Army officer, Colonel A. L. White, of No 113 Upper Grosvenor Road, Tunbridge Wells, concerned at Mitchell's sickness and poverty, joined with Dr. Gilbert, Mitchell's physician, in calling a public meeting to open a Fund for the old Balaclava soldier.

Donations quickly came in, and the Committee booked the Great Hall at Tunbridge Wells at which Lord Tennyson's poem "The Charge of the Light Brigade" was to be recited, but it was too late, for within a few days Mitchell was dead, refused aid by a War Office letter — because he was "not in absolute distress..."

The man who had been noted for his physique — he went through all the Crimean campaign without a day of sickness — still had the relic of a tremendous sword arm, 'still of a span many soldiers would be proud of,' the 'Courier' reported at the time.

Ex-Sergeant Mitchell was buried on a Tuesday afternoon in the parish churchyard at Southborough, which is now known as St. Peter's. His grave is still there, with a fine headstone in a good state of preservation. His funeral procession left Taylor Street headed by the local Yeomanry (Volunteer Cavalry) and the Volunteers (Infantry). Four Sergeants from the 13th Hussars acted as pall-bearers and twenty police-men escorted the Union-Jack draped coffin mounted on the manual fire-engine of the Tunbridge Wells Volunteer Fire Brigade.

In early October 1997 a local ex-service man, then aged 80, seeing the very neglected condition of the erected stone and the part of the graveyard in which Mitchell is buried, wrote to the local Council asking if, in view of the respect with which the former, a local man, is held in military circles, a clean-up operation could be put in hand before the anniversary date of the Charge. He also asked if a suitable in-memoriam wreath from the local community could be placed on it.

No acknowledgement having been received by the 24th of October, the gentleman in question made an attempt to clear the worst of the undergrowth, brambles, nettles and grass, etc, from around the stone, and scrubbed it down to reveal what he could of the fast being obliterated inscription, and the following day laid his own personal tribute of an evergreen wreath. The card with it read:

"A tribute from the gunners [surmounting the Corps badge] to the memory of Sergeant Albert Mitchell, 13th Hussars. One of the Light Brigade (The bravest of the brave) Balaclava 25th October 1854. Passed away 16th January 1897 — aged 67 years. Still remembered by a later generation of old soldiers, January 1997. This memorial includes those courageous and faithful companions — the horses."

The condition of the stone having been brought to the notice of the now amalgamated regiment, an officer replied, promising help with the cost of refurbishment, but nothing had been done by September 1998. Equally the local Town Council promised a clean-up operation would take place in April 1998. But again, nothing has yet [2002] been done. 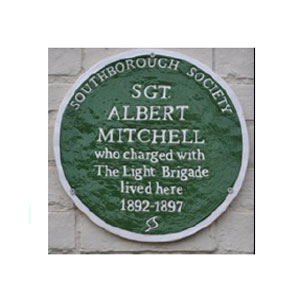 Green Plaque on the wall of his home at 2 Taylor Street, Southborough. The image is taken from A M Macfarlane's short article on Albert Mitchell, available on the Southborough Society's website, as is a locator map (accessed 13.2.2014)].

For further information, or to express an interest in the project, please email the editors, Philip Boys & Roy Mills, via info@chargeofthelightbrigade.com