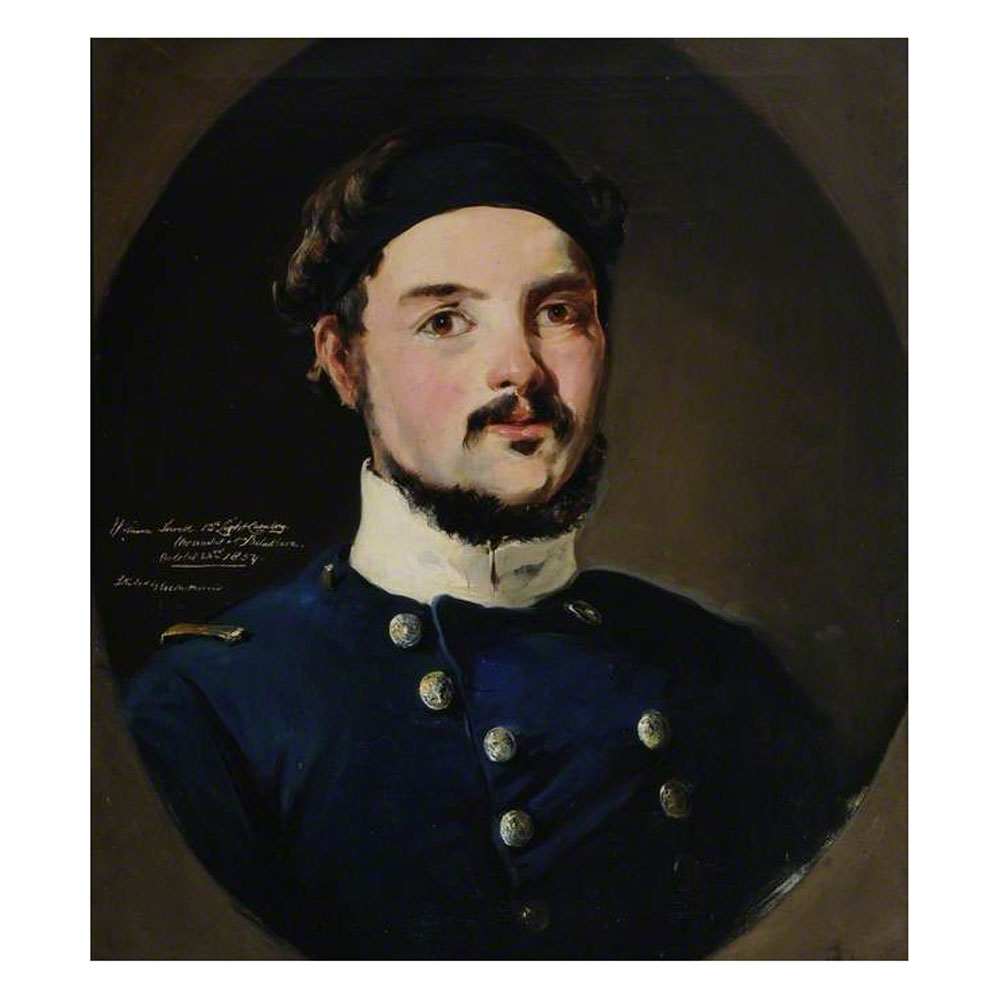 Severely wounded in action at Balaclava, where his horse was shot under him, but he managed to mount a Russian horse and get back to the British lines.

Sent to Micklingore [Mickleham? His home?], Dorking, Surrey, "on sick furlo until discharge", on the 31st of June.

Finally discharged from Chatham Invalid Depot on the 6th of November 1855, as:

"Unfit for further service from severe wound of the head from fragment of shell at Balaclava - four fractures of the skull and four foliations of bone behind the left ear. Suffers from headaches and vertigo."

He had a silver plate fitted over the wound in his head.

Conduct and character: "good". Not in possession of any Good Conduct badges.

Granted a pension of 10d. per day.

Entitled to the Crimean medal with clasps for Balaclava, Sebastopol and the Turkish medal.

Documents confirm the award of the Crimean medal with clasps for Balaclava and Sebastopol.

Member of the Balaclava Commemoration Society in 1879

He became coachman to the Earle family, later marrying Mary, the cook. He was also for many years employed by Sir James Pickton at Woolton Hill.

Thanks to Mr A. Roberts of Liverpool, there is a copy of his marriage certificate in the "Certificates" file.

The marriage between William Sewell and Mary Dodson (not Dobson) took place at St. Clement's Church, Windsor, Liverpool, on the 1st of January 1857. Both were residing at Mr. Naylor's, Spekelands, Windsor.

William Sewell's father, also William, was a Labourer, and her father, William Dodson, was a cattle dealer. According to churchyard and census records, the name "Dodson" was later given as a second Christian name to their son, also called William.

Margaret Sewell's birth is registered in the January - March Quarter 1858, in the West Derby registration district of Liverpool.

William Sewell, aged 29 years, Coachman, born Mickleham, Surrey, was living at this time with his wife, Mary, also 29, born at Winsford, Cheshire, and two children, Margaret, 3, Scholar, and Helen, aged one. Both children were born in Liverpool.

Their daughter Margaret died in 1864, and is buried in Toxteth Cemetery.

His son, William Dodson Sewell, died in 1874, and is buried in the family grave in St Peter's churchyard, Woolton, Liverpool.

William Sewell received help from theRoberts Fund before his death.

Also thanks to Mr. Rigby, we now know that Sewell's last home, 18 Rose Lane (a terracotta brick-built house common to the area), is still there - and inhabited.

The Earle family, for whom he once worked, lived at Allerton Tower, only a short distance from St. Peter's churchyard at Woolton in which he is buried. By 1985 it had been demolished, and the grounds are now a public park and gardens, but the stables, where William Sewell would have worked, are standing, and are now being used by the park maintenance staff.

The Earles were a very rich family, whose wealth was based on the railways. Hardam Earle was on the board of the Manchester-Liverpool Railway.

Sir James Picton, by whom Sewell was also employed, was a well-known architect and local historian. His memorial is in the form of a clock-tower standing at a well-known road junction in Liverpool.

Buried in the churchyard of St Peter's at Woolton, Liverpool, on the 13th of January 1910.

"In the presence of a large gathering the remains of the late Mr. William Sewell, who died at his residence in Rose Lane, Brierley Hill, aged 78 years, on the 8th inst. were laid to rest on the 13th inst. in St. Peter's church-yard at Woolton in the family grave.

The deceased was one of the few survivors of the charge at Balaclava, when as a private in the 13th Light Dragoons (now the 13th Hussars) he was in the first line of the charge of the "Six Hundred." He was then severely wounded, but was able to reach the British lines subsequently, mounted on a stray horse belonging to the enemy.

He also took part in the action at Sebastopol and held the Crimean and Turkish medals with two clasps. Together with his comrade, Sergeant E. Hindley, who was present at the funeral, they were the only two survivors in Lancashire of the Six Hundred. It was hoped by many friends that the deceased would be accorded a military funeral, but this could not be arranged."

The family gravestone in St. Peter's churchyard at Woolton, Liverpool, bears the inscriptions:

In front of the headstone is a smaller stone which probably originally had a small stone cross on it, which bears the single word "Emily" on it.

There is a photograph of this gravestone in the 13th Hussar file.

See copy of his funeral report taken from theLiverpool Courier for the 15th of January 1910 in the 13th Hussar file.

Among his documents are the following:

Letter from the War Office dated the 21st of April 1902, asking "whether man receives an allowance from the Balaclava Fund". "To O/C. Troops, Liverpool District," asking "for man to be medically examined". This led to an increase in pension to 18d. per day from the 12th of September 1902.

In red ink, and dated the 26th of November 1902, "Awarded the Crimean medal with clasps for Balaclava and Sebastopol."

Letter (dated 4th of December 1902) to the Secretary of State informed him that:

"This man received the Crimean medal, but it is not sure if he rode in the Light Brigade Charge. Entry. Man entered on the list of Balaclava Survivors - 1907."

The uniform he wore at Balaclava was formerly in the Royal United Services Institute Museum in Whitehall. His coat, and medals, were given to the Museum in 1912 by his daughter, but were presented by it on its dissolution to the National Army Museum. The medals are engraved naming and the Turkish medal has an unofficial silver suspension. [RM: See photo.]

"A uniform of the 13th Light Dragoons, formerly the property of Private W. Sewell, and worn by him in the Charge of the Light Brigade at Balaclava on October 25th 1854, has been added to the collection of the United Services Museum."

[PB, Feb 2014: A number of articles of clothing are now on display at the National Army Museum, and can be viewed online, including his overalls, forage cap, short-tailed coatee, and spurs. 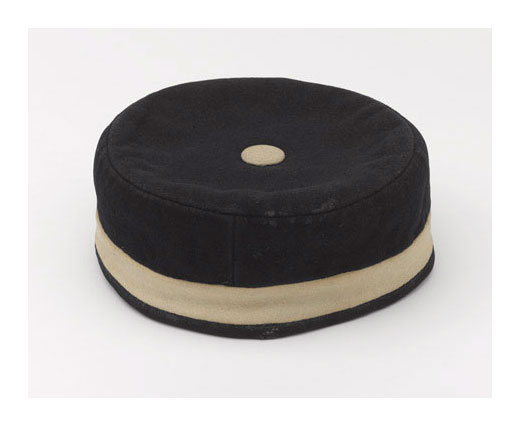 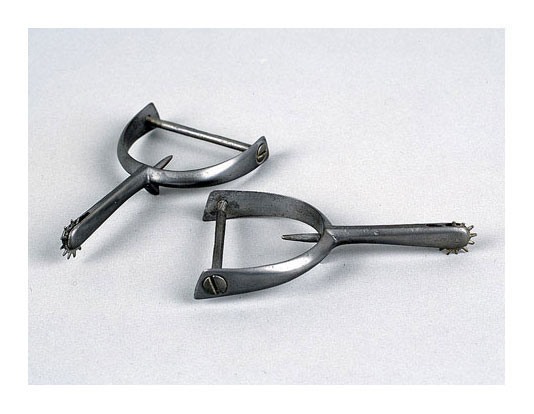 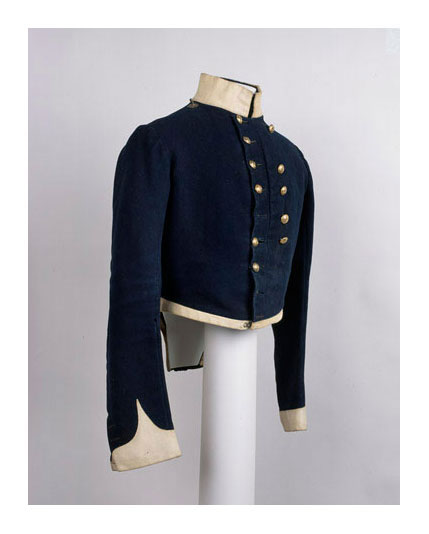 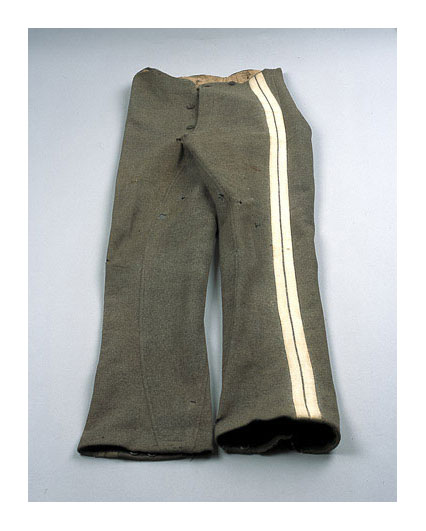 In 1981 an oil painting of William Sewell was secured at auction with the assistance of the Ogilby Trust and is now in the Regimental Museum of the 13th/18th Hussars. There is a photograph of this painting in the 13th Hussar file.

[PB, Feb 2014: Splendid image. What exactly is the text on the left of the picture? It appears to be: "William Sewell 13th Light Dragoons. Wounded at Balaklava. ? October 25th 1854. [? illegible]." In what circumstance was this portrait painted? Is he wearing a black bandage round his head?