Photograph of Robert Sheffield in old age, published the day after he died in 1914 [unknown source]

Invalided from India to England on the 1st of February 1859.

Transferred to the Army Hospital Corps from the Cavalry Depot and sent to Chatham on the 1st of December 1859.

Returned from Canterbury to the 3rd Dragoon Guards on the 1st of January 1860.

Robert and Ann appear to have had a new child regularly every other year for sixteen years:

According to their headstone [below], they had another child, Fred, in 1881, who died at the age of 10 months.

[PB: A Robert and Ann Margaret Sheffield were living in Canterbury in 1861. This must be them, even though Robert said he was born in London, not Durham as is recorded in later Censuses. ]

Transferred to and re-engaged for a further period of 12 years in the 3rd Dragoon Guards and transferred back again to the Royal Hospital Corps on the 20th of September 1866. 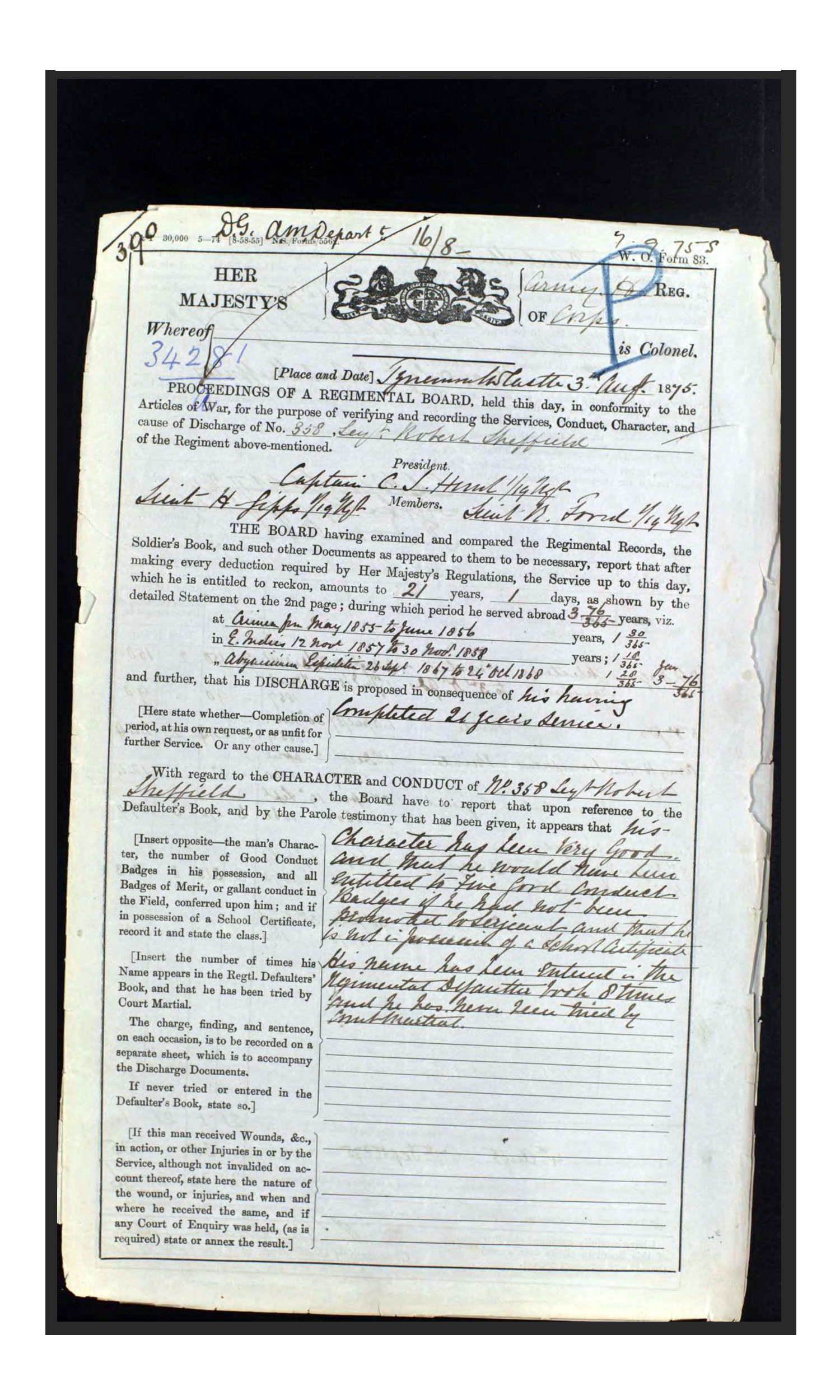 Discharged as "358 Sergeant Robert Sheffield" from Tynemouth Castle, Northumberland, on the 3rd of August 1875.

Conduct: "Character has been very good...would have been entitled to five Good Conduct badges if he had not been promoted to Sergeant...not in possession of a Scool Certificate."

Entitled to the Crimean medal with clasp for Sebastopol and the Turkish medal.

Awarded the medal for Abyssinia.

Awarded the Long Service & Good Conduct medal on the 1st of April 1874, with a gratuity of £5., but there is no indication on his documents of this.

Not recorded by Lummis and Wynn.

In 1881, Robert Sheffield was living in York with his wife, Ann Margaret, and nine children: three boys and six girls aged from 3 to 19.

n.b. Wortley is also the district listed for her death, see below.

In 1891, Robert and Ann Margaret Sheffield were living in Ecclesfield, about 4 miles north of Sheffield, Yorkshire, with five of their children. He was working as a Timekeeper in a Steel Rolling Mill.

1901: Robert and Ann Margaret Sheffield were still living in Ecclesfield, Sheffield, with three of their children, one of whom is there with her husband and two children. 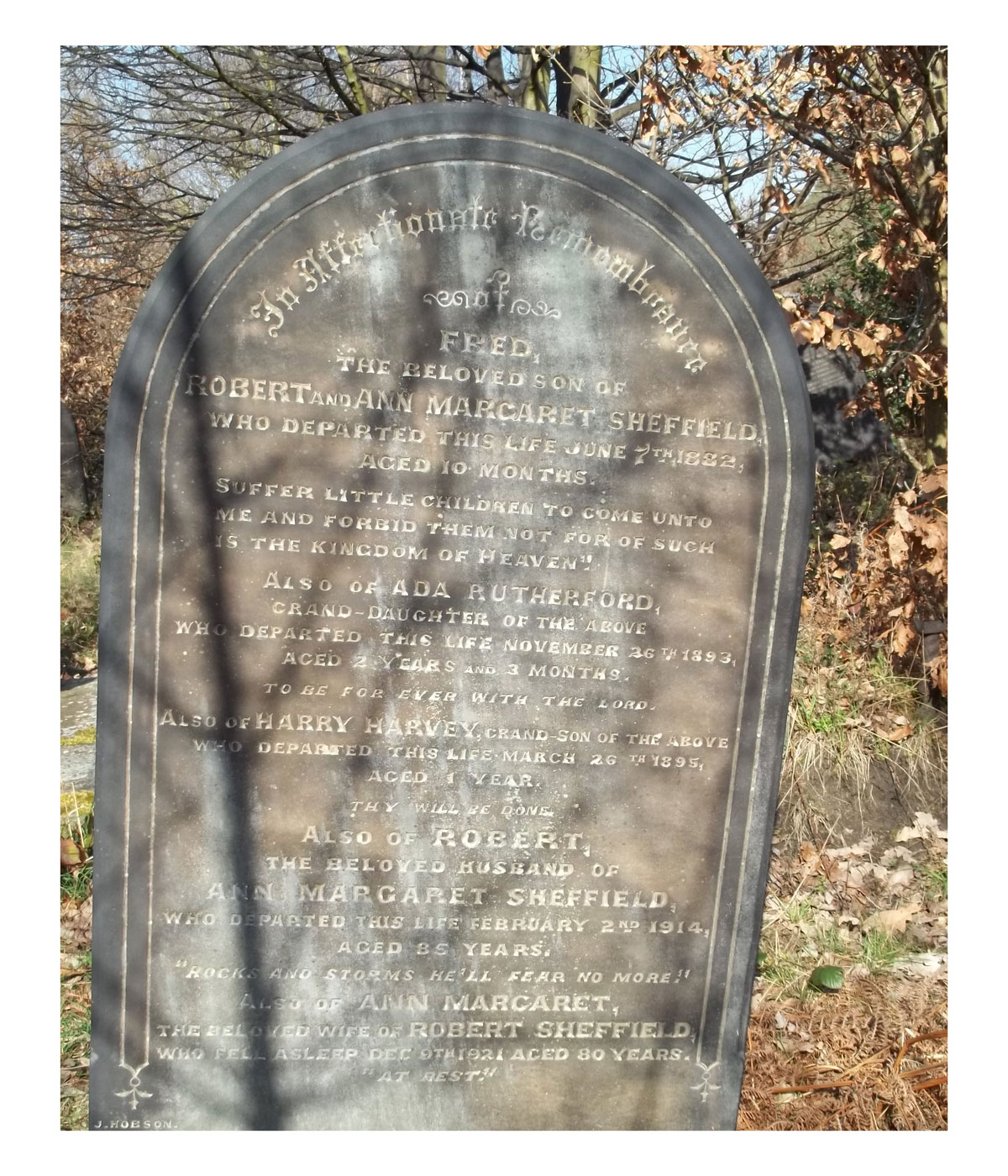 In Affectionate Remembrance of Fred, the beloved son of Robert and Ann Margaret Sheffield, who departed this life June 8th 1882, aged 10 months.

"Suffer little children to come unto me and forbid them not for of such is the kingdom of Heaven."

Also of Ada Rutherford, grand-daughter of the above who departed this life November 26th 1893, aged 2 years and 3 months.

To be for ever with the Lord.

Also of Harry Harvey, grand-son of the above who departed this life March 26th 1895, Aged 1 year.

Thy will be done.

Extract from his obituary report, taken from the Sheffield Daily Telegraph, 4th of February 1914:

A link with the past has been severed by the death of Mr. Robert Sheffield, which took place on Monday at his home, 312 [?], Stanningham [sic? presumably Stannington] Road, Malin Bridge, Sheffield.

Deceased, who was 85 years of age, was well known in Sheffield, and served with the troops in the Crimean War, being present at the fall of Sebastopol in 1855.

He was the son of the late Mr. Thomas Sheffield, and was born in Durham. He commenced his life as an apprentice in the Navy, but being dissatisfied with this, ran away, and for a time was employed in a coal mine. Eventually he obtained employment in the offices at London Docks.

He entered the Army in a remarkable manner. He was looking in a shop window in London, when the recruiting sergeant came to him and he had consented to join the ranks, and taken the "Queen's Shilling", almost before he was aware of the fact. He regretted his action the next day, indeed, he asked to be relieved of his duties, but needless to state this application was not considered.

He was enlisted into the 13th regiment of Light Dragoons at the age of 23 years, and almost immediately embarked to join the service troops in Sebastopol. He returned to England in 1856, and in 1857 he went to Bombay, where he remained two years.

On his return he was appointed Sergeant in the Army Hospital Corps and went on the Abyssinian expedition in that capacity.

On his return he was appointed Hospital Steward at Hilsborough Barracks, a position he held for several years.

He left the service about 37 years ago, and retired on a well-earned pension to Sheffield, where he resided up to the time of his death.

Of a very reserved disposition, he was always loath to discuss his experiences abroad, but used to tell jestingly of the time when he was taken to the hospital mortuary as a dead man. It occurred during the Crimean War. He was riding a drum horse and was thrown heavily to the ground, the impact rendering him unconscious. He was supposed to be dead, and it was not until he was medically examined that the mistake was discovered.

He was married on the 6th of September, 1866, and leaves a widow, three sons, and six daughters. There are also 24 grandchildren and four great-grandchildren.

He possessed four medals, one for service at Sebastopol, the Abyssinian medal, the Turkish Crimean medal, and the Long Service and Good Conduct medal.

He was a member of the Lord Wharncliffe branch of the Sheffield Equalised Independent Order of Druids and was the oldest member of the Hillsborough Baptist Brotherhood.

A picture of him in old age and wearing his medals appeared in the same edition. (There is a copy in the 13th Hussar file.)

Extract from the Sheffield Daily Telegraph for Saturday, 1st of February 1914 [?]:

"Military honours will be accorded at the funeral which takes place this afternoon at Wardsend of the late Mr. Robert Sheffield, who died on Tuesday last [sic] at the age of 83 [sic]. In addition to the firing party and buglers from Hilsborough Barracks the cortege will also include a band, and Sergeant Major Bye in charge of ten veterans. The first part of the burial service will be read at Taplin Road Baptist Church at 2.30 p.m."

Extract from the Sheffield Daily Telegraph for the 3rd of February 1914:

Although the cold wind and sleeting rain on Saturday afternoon had the tendency to rob the spectacle of some of its effectiveness, the funeral of the late Mr. Robert Sheffield, one of the few remaining members of the band of Crimean veterans, attracted thousands of people along the line of route from Nannington Road to Wardsend Cemetery.

Full military honours were accorded, the Sherwood Foresters who are stationed at Hilsborough Barracks, where on two different occasions Mr. Sheffield was stationed in charge of the military hospital, furnished the firing party of eighteen men under Colour Sergeant Kieran and a full band of brass and reed instruments under the direction of Sergeant Barham, while the 131st Battery, R,A, supplied a mounted team of six sergeants with a gun and carriage and also eight bearers.

The Hilsborough Baptist contingent of the Boys Life Brigade also paraded and another interesting feature was the presence of ten veterans out of the twenty-four still residing in Sheffield. They were headed by Sergeant Major J. C. Bye, all wearing their sashes and medals.

The funeral service was conducted at the Taplin Road Baptist Church where the Pastor, the Reverend C. J. Rendall, delivered a striking appreciation of the deceased veteran who was one of the oldest members of the Brotherhood and attended regularly until a short time before his death.

The tall stately figure of Mr. Sheffield, he said, with his long flowing beard, had been for more than a quarter of the century one of the most striking personalities of the district, and will be greatly missed. "He had taken the greatest interest in the growth and prosperity of the Brotherhood and was a man of inflexible will, yet capable of the most immense affection.

The reverend gentleman also, on behalf of the family, expressed the appreciation which they all felt for the courteous actions of the military authorities in according the deceased full military honours on that occasion.

On leaving the church, around which dense crowds had assembled, the procession was reformed, headed by Chief Divisional Inspector Head and Inspector Oates, followed by the firing party, the band, the mounted gun-carriage bearing the coffin covered with the Union Jack, the Boys Life Brigade and members of the Brotherhood.

On approaching the Wardsend cemetery the band played the Dead March, which was confirmed until the slope at the entrance of the ground was reached. Here it was deemed advisable to release the coffin from the gun-carriage and carry it to the graveside, where the last rites were performed by the Revd, C. J., Rendall.

The customary volleys were then fired, after which the Last Post was sounded and the impressive ceremony closed.

Although there were large crowds of people at the cemetery the duties of the police were nominal, the behaviour of the people being all that could be desired."

[A long list of family mourners, friends and wreath-senders follows.]

We are very grateful to Howard Bayley (Sheffield College) and George Proctor for providing the photograph of Robert Sheffield's headstone in Wardsend Cemetery, and its plot number. There is an active Friends of Wardsend Cemetery group:

The "Friends of Wardsend Cemetery" group has been set up with the aim of promoting this historic Victorian Cemetery whilst trying to preserve the abundant flora and fauna which has adopted this site over the last 150 odd years. This cemetery is the last resting place of over 30,000 Sheffield and district people as well as military personnel from the nearby Sheffield (Hillsborough) Barracks.