Born in the parish of St. Cuthbert's, Carlisle.

Enlisted at Westminster, London, on the 14th of September 1841.

At Scutari General Hospital from the 22nd of September 1854 and sent to rejoin the regiment on the 3rd of October 1854.

Appointed to Troop Sgt-Major on the 17th of October 1854.

Wounded in action and taken prisoner of war at Balaclava, 25th October 1854.

Rejoined the Regiment from Russian captivity on the 26th of October 1855.

Tried by a Garrison Court-martial at Scutari on the 10th of November 1855, "having been taken a prisoner of war at Balaclava during the Charge of the Light Brigade - of which he was honourably acquitted." Received nine wounds - reported as being "seriously wounded."

Sent to the Depot in England from Scutari on the 15th of December 1855.

Removed to Sergeant on the 5th of June 1857, but no reason given.

Re-appointed to Troop Sergeant Major on the 1st of October 1857.

Discharged from Norwich on the 19th of September 1865, at "Own request, free to pension after 24 years service."

In Turkey and the Crimea: 1 year 5 months.

Conduct and character: "very good." Would have been entitled to five Good Conduct badges if not promoted to Troop Sergeant Major.

Once tried by Court-martial.

To live at Lynmapsis [sic?], near Oswestry, Salop.

(There are two farms of this name at Llwynymapsis, Morda. One (now derelict) is dated 1768, and is said to have been used by the Yeomanry cavalry to stable their horses.)

Entitled to the Crimean medal with clasps for Balaclava and Sebastopol and the Turkish medal.

Awarded the Long Service & Good Conduct medal with a gratuity of £15 on the 7th of August 1862.

Documents confirm the award of the Crimea, Turkish, and Long Service medals.

The 1871 Census shows a George Smith, aged 50, a Chelsea Pensioner, but born at Bungay, Norfolk, and his wife, Elizabeth A. Smith, aged 38, born at Cockermouth, Cumberland.

His place of birth is at variance with that shown in his documents, and something supported by his sister's address in the same parish as he was born [PB: meaning unclear].

Died in the Shrewsbury Pension District on the 16th of October 1871. Committed suicide by "shooting himself in the head".

(See copy of his death certificate in the "Certificates" file.)

Extracts from the Oswestry Advertiser, 18th of October 1871:

"Death. - October 16th, at Whittington, Mr. George Smith, late of the 13th Light Dragoons and one of the "Six Hundred" at Balaclava:

Whittington. - Funeral of the late Sergeant-Major Smith - On Friday afternoon the remains of Sergeant Major Smith, who committed suicide by shooting himself whilst labouring under a fit of insanity, were interred in Whittington Cemetery.

In consequence of the deceased being widely known and respected in the district, together with the tragic nature of his death, a large number of persons assembled to witness the funeral ceremony.

Deceased was buried with military honours, and there were a considerable number of the North Shropshire Yeomanry cavalry present, being under the command of Major and Adjutant Playe Smith.

The Yeomanry assembled at half-past two, and marched in double line to the deceased's house, where they were joined by the cortege and proceeded to Whittington Church, preceded by the band of the Oswestry Volunteer Corps.

The coffin, borne by Samuel Jones, John Jones, Joseph Gundrey and William Williams, came next, followed by the deceased's charger accoutred in the usual manner for the sad occasion, and led by two Sergeant Majors. Then came mourners and friends, the Yeomanry in double-file bringing up the rear.

After the service in the church, the party proceeded to the cemetery and the Revd. W. Walsham Howe read the burial service. After the coffin had been lowered into the grave, a firing-party, which had been told off for the purpose, fired the usual three volleys and the large company slowly began to disperse."

He was buried in the churchyard of St. John the Baptist at Whittington. A letter to the local Council was passed on to the then Vicar [in 1985] who replied that some 30 or so years ago many of the tombstones were removed when the area was landscaped and these were placed flat on the ground against the west wall of the churchyard.

George Smith's memorial stone was one of these and is positioned as the 13th stone in from the railings and in the 4th row down from the wall. It reads:

"Sacred to the memory of Troop Sergeant Major George Smith, Late 13th Light Dragoons, who departed this life, 16th October 1871, aged 52 years, after 24 years service in the Army and six years in the North Salop Yeomanry. He was one of the "Six Hundred" at Balaclava, "Thy Will be Done."

In the general view of the churchyard the stones are on the left-hand side, behind the cross and tree. This itself is a memorial, and is known as the "Gunner's Oak."

His medals, discharge documents, account book, and two letters which he had written home from the Crimea are known to be in a private collection [2002].

These service documents disclose a number of details not previously known:

"Services Abroad - Landed with the 13th Light Dragoons at Varna, 22nd of June 1854. Served in Bulgaria until the 1st of September 1854. Landed in the Crimea, 5th of October 1854. Was present at the battle of Balaclava, Oct. 25th 1854, where he had two horses shot under him and received nine lance and sabre wounds. Was disabled and taken prisoner; marched into the interior of Russia and back to Odessa. Exchanged, and landed at Kamisch, the 26th of October 1855. Returned to England, 18th of January 1856. (His wounds were detailed as a sabre wound on the right fore-arm, 2 inches long obliquely across the outer and back part and partially dividing the muscles. Eight minor sabre and lance wounds on body.)

His next of kin were shown as his wife, Elizabeth Ann - "With the Regiment" - and his sister, Mary Ann Turner, St. Cuthbert's Parish, Carlisle.

Only part of the first letter, which was written soon after his arrival in the Crimea, survives:

"... the Rock of Gibraltar when it was pitch-dark so that we could distinguish nothing but the light placed at the end of the point as a landmark. Malta appeared to be very beautiful and strongly fortified a place. The church bells were ringing all the time we were anchored outside the harbour for a few hours. I regretted not being able to go ashore at Malta, but I was more fortunate at Gallipoli, where I obtained leave to do so, and walked through the French camp, who are here in some force. I fraternised pleasantly for an hour or so and then returned to the ship. But we must not complain, rather let us be thankful that we have the health and strength to carry us through our station in life. If you write to me - address it - Regimental No. 1106 Sergeant George Smith, 13th Light Dragoons, Army in Turkey. Goodbye, and God Bless You.

The other letter was written to his sister from Balaclava, soon after his return from Russia. Parts of the letter cannot be deciphered because of creases in the paper:

Would you believe it that I am writing to you again. How grateful I ought to be to God for all his mercies to me. I cannot tell you if it is our Maker's will that we will ever meet again. - what happiness - what a long story I can tell you of Russia after marching upwards of 1200 versts into the interior. We arrived here from Russia (Odessa) on the day after the anniversary of the action of Balaclava. One fortunate instance of my being a prisoner is that I am for the moment a person of some affluence, but we will settle our affairs on the money you have spent on my behalf when we meet.

I felt very much excited at meeting a few old comrades, although Death has deprived me of many friends.

They tell me I have lost promotion by being a prisoner, my junior non-commissioned officers in the regiment are now enjoying commissions. I do not grumble, but hope for the best.

The Regiment has gone to Eupatoria and only a very few are left here. Such is the situation that I cannot tell you what they will do to dispose of me. Thank God I am now writing with my right hand, though I could not do such for many months. It is not strong, but it will not render me incapable of doing my duty conscientiously if they use me well. Write for me to Mary Ann and Elizabeth, give them my best love, and regards to Father, Mr. Peel, and to everybody we know, Write to me please at Balaclava, it will be sent on to me if I am not there.

God bless you all and believe me, affectionately,

P.S. They will not take money at the Post Office and cannot, at the present, obtain stamps."

Sergeant George Newman of the 23rd Foot mentions him in his diary, published as The Prisoners of the Voronesh:

"One Sunday we had another Sergeant Major of the Light Cavalry join us, whose name was Smith. He had been injured in his right wrist by a sabre cut at Balaclava. He went into the staff-room, but I do fancy he was not a great favourite there as he was too plain-spoken, but the remainder of us liked him very much indeed. One evening there was a tremendous shindig amongst the staff. O'Neale and Troop Sergeant Major Smith were the chiefs, but the others aided and abetted; but O'Neale would not fight, as he was wanted to."

The cottage in which he lived at Whittington, after demolition, formed part of the present "Boot Inn". The dining room of the Inn was formerly the kitchen, and an old spiral staircase and fire place now form the main feature of the room.

Local stories abound of a ghostly old woman and the sound of a shot from upstairs at the time when he is known from the inquest report to have committed suicide.

PB, 29.11.2014: In November 2014 an article about George Smith was published in the Border . It mentioned how his gravestone had been restored by Helen and Ian Smith in 1984:

THE year 2014 marks the 160th anniversary of the Battle of Balaklava during the Crimean War on October 25, 1854 well known for the infamous Charge of the Light Brigade.

One of the survivors serving in the 13th Light Dragoons was Trooper Sergeant Major George Smith who is buried in the Garden of Remembrance in Whittington, the original burial ground opposite St John the Baptist Church.

After discharge from the army, George Smith lived with his wife at Church Hall, Church Street, Whittington and his gravestone was found lying in the Garden of Remembrance in 1984 by Helen and Ian Smith of Oswestry, members of the Crimean War Society Research Society.

Ian Smith and Philip Morris, who assisted in the restoration of the gravestone by the Whittington Parish Council Crimean Society placed their floral tributes at the grave to mark the anniversary. 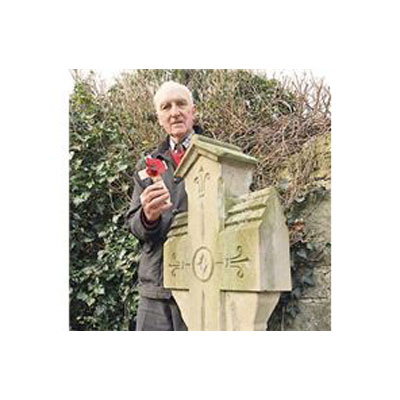