Born at Rigton, near Otley, Yorkshire, on the 29th of November 1798, the youngest of 9 children born to Joseph Mountain and Christiana Stubbs.

He was christened on the 25th March 1799 at the Windsor Lane Independent Church at Knaresborough.

On the 6th of January 1828 he married Patience Wright (baptised 11th of May 1807 in Wakefield) at St John the Baptist Church at Wakefield. The witnesses were John and Bessy Wright. Neither Ephraim nor Patience could sign their names.

[PB: In 1855, Ephraim Mountain named as his next-of-kin his wife "Rebecca". It is possible she had two names.]

A son, Joseph Wright Mountain, was born on the 25th of January 1834 and baptised on the 23 February 1834 at St. Peter's, Leeds. Their abode at that time was Lucky Lane, Leeds. Ephraim was described as a Corporal in the 13th Dragoons at this time.

From Private to Corporal: 8th of November 1833.

Reverted to Private, "at his own request", following the Reduction of the Regiment to Home Establishment on its return to England from India in 1842.

From the muster rolls it would appear that he spent the greater part of his time as an N.C.O. on recruiting duties in various parts of the country.

Patiance Mountain [sic? The spelling of her forename is uncertain as we have not been able to view the original Census return], 43, Soldier's wife, born Stanley, Yorks.

Sent to Scutari on the 20th of September and to England aboard the S.S. "Great Britain" on the 25th of November 1854.

Discharged from Chatham Invalid Depot on the 19th of January 1856:

"Invalided from Turkey as the result of an accident. He arrived in this country in the early part of this year (1855) since when he has suffered from rheumatism — the result of his long service. Present at the battle of the Alma."

In Turkey and the Crimea: 8 months.

To live in Wakefield, Yorkshire, but he was living in Leeds in 1875.

Although his documents show that he was "present at the battle of the Alma", he is not shown on the medal roll as being entitled to this clasp, but only for the clasp for Sebastopol and the Turkish medal.

He was presented with his Crimean medal by Queen Victoria at aceremony on the Horse Guards Parade on the 18th of May 1855.

His name appears on the Nominal Return of those present, now in the National Archive, and also on a similar roll that appeared in the United Services Magazine for June of 1855, and another in theIllustrated London News of the 26th of May 1855.

Awarded the Long Service & Good Conduct medal on the 2nd of May 1856, with a gratuity of £5. (This after he had left the Army.)

In March 2013, the editors were contacted by Ephraim Mountain's great-great-great-niece, Gillian Crossley. She had unearthed a considerable amount of information about her relation, which she kindly agreed to share:

"He was born the 29th November 1798 at Rigton, the youngest of 9 children born to Joseph Mountain and Christiana Stubbs. He was christened on the 25th March 1799 at the Windsor Lane Independent Church at Knaresborough.

On the 6th of January 1828 he married Patience Wright (bapt. 11 May 1807, Wakefield) at St John the Baptist Church at Wakefield. Witnesses John and Bessy Wright. Neither Ephraim nor Patience could sign their names.

They had one son (that I can find), Joseph Wright Mountain, who was born on the 25 January 1834 and baptised on the 23 February 1834 at St. Peter's, Leeds. Their abode at that time was Lucky Lane, Leeds. Ephraim is described as Corporal in the 13th Dragoons.

In 1851 he appears living in Scotland at Hamilton Cavalry Barracks, Hamilton, Lanarkshire. His wife is there also and Ephraim is described as a labourer born Kirkby (Overblow) in 1805. His son doesn't appear (and I haven't been able to find him in any census so perhaps he died very young.)

In 1861 Ephraim and Patience are living at Cross Barrack Street, Leeds. Ephraim uses the name 'Peter', he is described as being born in 1801, Rigton, Yks and is an army pensioner.

His wife Patience dies in the 3rd Quarter of 1865 at Leeds.

I don't know why, on his army record, he puts Rebecca as his next of kin in 1855, unless she had two names.

Also, in reference to 605 William Doogan, 13th Light Dragoons, who was enlisted by Ephraim Mountain. He seems to appear in 1851 at Hamilton Barracks, Lanarkshire, Scotland under 'William Dorgan, born 1811'."

PB: "Dorgan" is presumably a recent transcription error, but at this time [2013] it is still not possible to view the original Scottish Census documents. Certainly many of the other names listed in the Barracks are wrong, sometimes wildly so e.g. Captain Soames Gambier Jenyns is named as "Joaque Gambies Leugus".

In March 2012 the archive was contacted by Jonathan Gill, seeking further information about an "H. M. Carter", possibly a member of the Light Brigade, whose Cavalry Manual (published 1835) has been in the family for at least 100 years. He included two remarkable photographs of an inscription in linking Henry Carter with Ephraim Mountain.

"I have attached some photos that you may be interested in. They are from a Cavalry Manual that has been in my wife's family since at least the end of the 19th Century (as my wife's grandmother could remember that her father had had the book all through her lifetime). 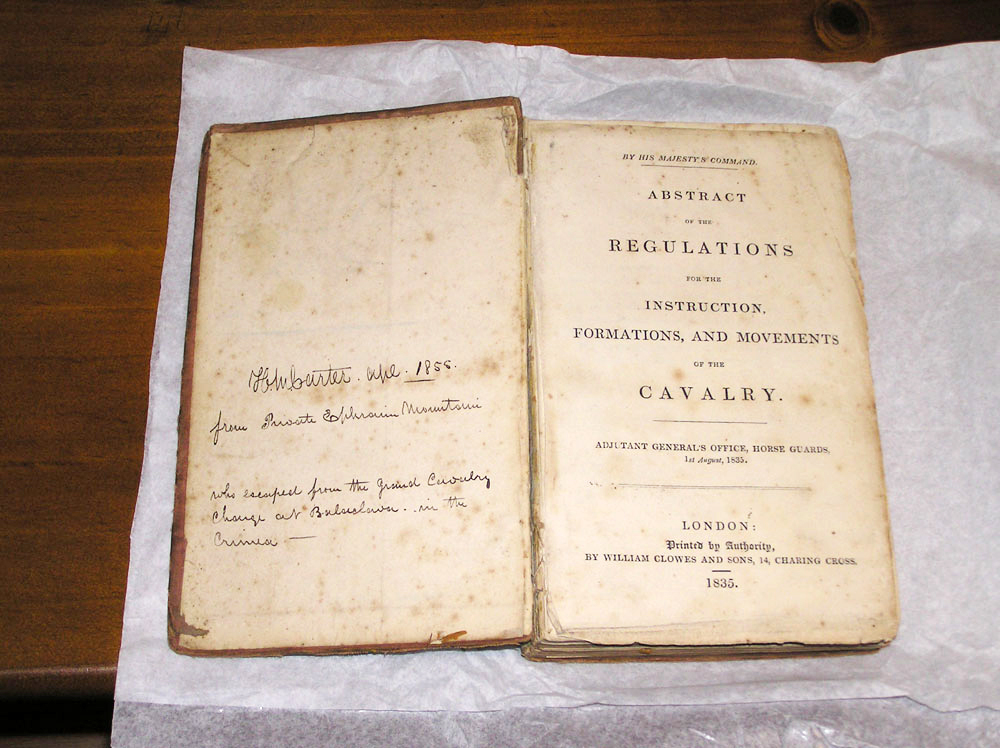 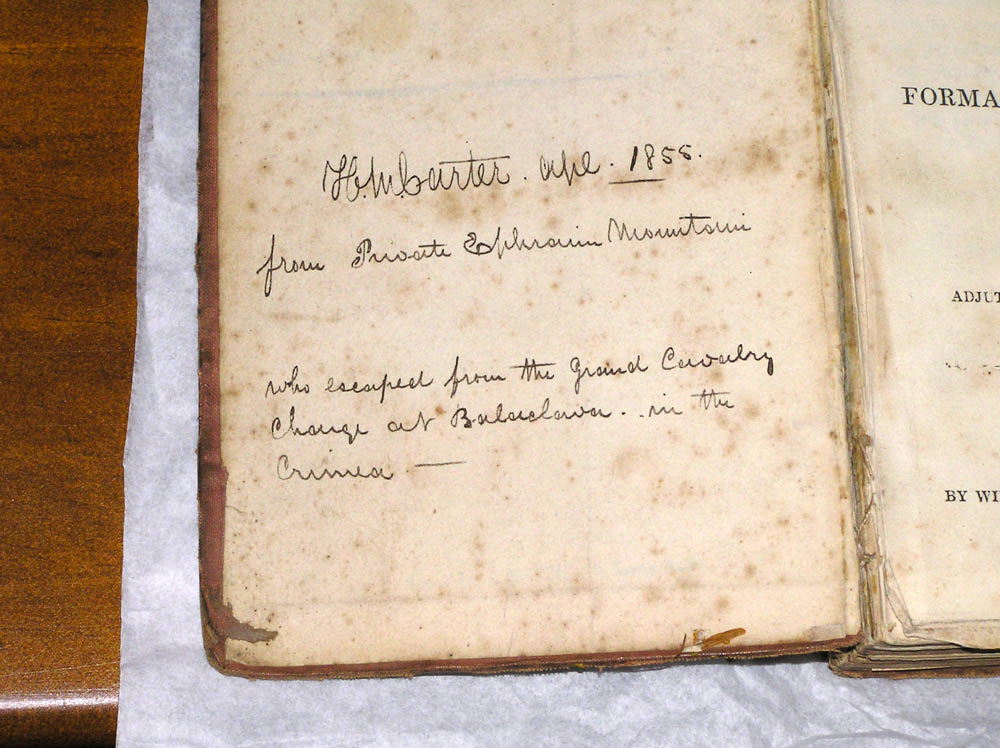 The other day I decided to have a look on the internet to see if I could find anything further and came across your website. You have a fantastic description of E Mountain on your site which I was not expecting as I was looking for H Carter, but the fact that E Mountain was in the Light Cavalry explains the connection between H Carter and E Mountain in the inscription.

My interpretation of the inscription is that the book was given to H Carter by E Mountain in April 1855 (which fits with the dates of when E Mountain was in the Crimea) and then presumably the reference about escaping from the Grand Cavalry Charge at Balaklava refers to what H Carter had done in October the year before? What are your thoughts on this?"

Research is continuing into whether this might have been one of the two "Henry Carters" in the 17th Lancers, both of whom fought in the Crimea: either 1145 Henry Carter or 1218 Henry Carter.

Ephraim Mountain must have been in England in April 1855, the date of the inscription, since he had been injured in September 1854 and returned to England at the end of 1854 (hence he did not Charge).

Neither Henry Carter is entirely ruled out. However, 1145 Henry Carter was wounded in the Charge and sent back to England on the 24th April 1855 [is this when he arrived back in England, or when he left Scutari]?, while 1218 Henry Carter did not arrive in the Crimea until June 1855, so might still have been in England in April [when did he leave for the Crimea?].

RM: A fine photograph can be viewed online of (dated 1858) of aJohn Kirkby Mountain, Inniskilling Dragoons. Given his middle name (Ephraim's birthplace, Kirkby), is it possible he and Ephraim were related? 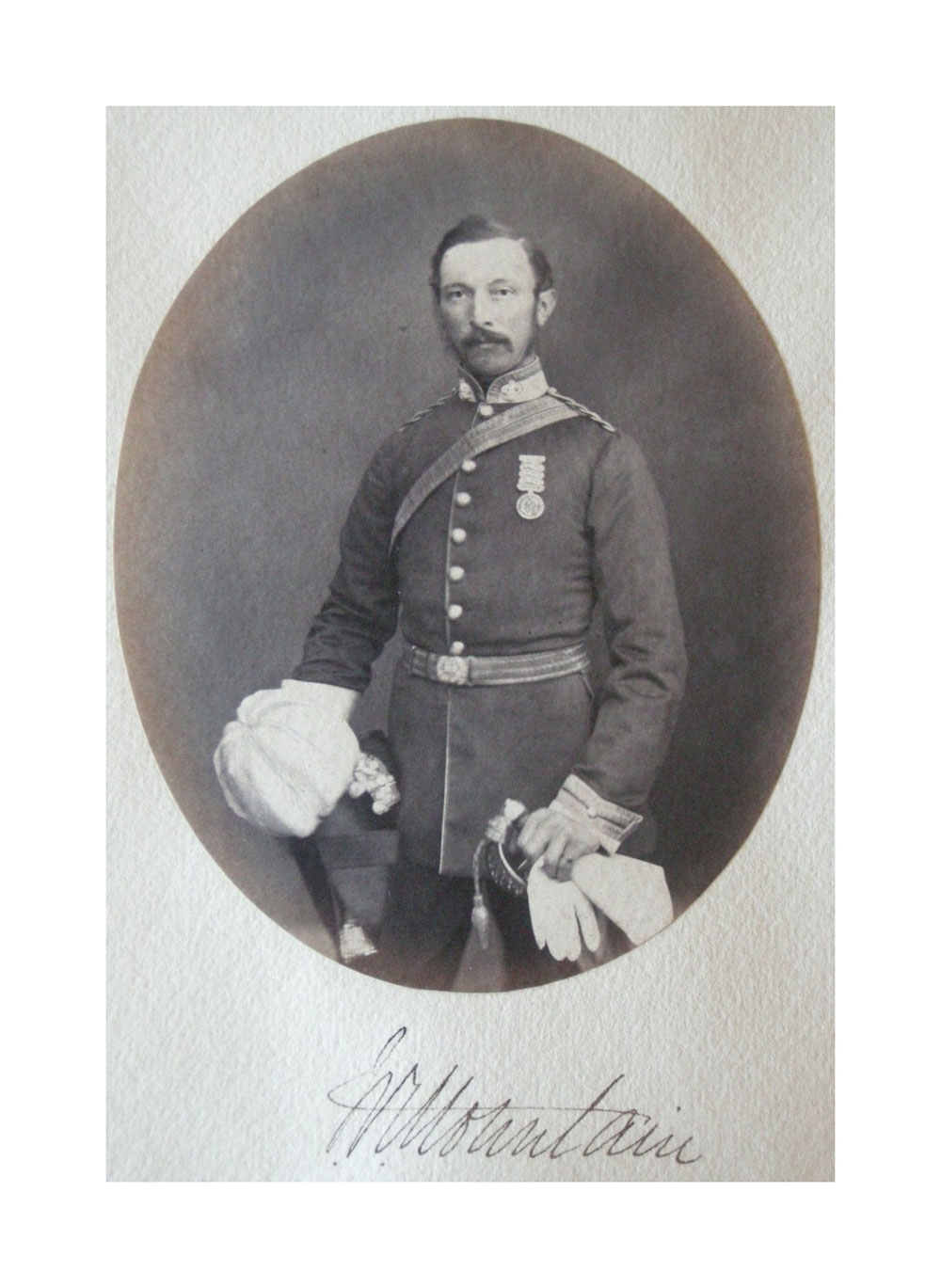 We are very pleased to acknowledge the contributions of Gillian Crossley and Chris Poole in helping to improve information in this entry, and of Jonathan Gill for providing photographs and setting an intriguing puzzle.